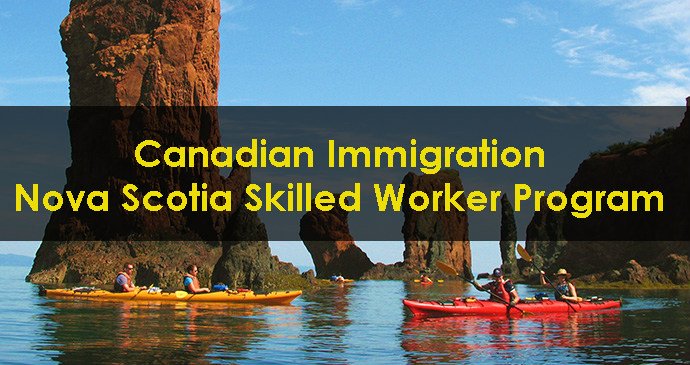 The Majestic province of Nova Scotia is unique in its own sense. The Atlantic Ocean and numerous small islands in the eastern part of the province surround the Nova Scotia peninsula. The major economic benefit for the province comes from the province’s capital, Halifax. There are about 400,000 people living in the metropolitan city.

Nova Scotia is indeed a beautiful province and the vast coastline presents delicious seafood delicacies. Many foreigners wish to immigrate to Nova Scotia. Fortunately, the province has its immigration program called the Nova Scotia Provincial Nominee Program Express Entry system. The good news is that many people are already actively migrating to Nova Scotia and the province is ready to invite more.

The Nova Scotia Nominee Program (NSNP) is for skilled professionals. The program is designed to increase immigration to the province. The program selects skilled foreign nationals who can be beneficial in increasing the province’s economy. An individual can immigrate to Nova Scotia through two different ways.

One of the two ways is from outside of Express Entry, the candidate can submit his Express of Interest (EOI) to the Nova Scotia Office of Immigration (NSOI). Assessment is based on the points system and eligible candidates are invited to apply for Nova Scotia Provincial Nominee Program (NS PNP or NSNP).

Candidates invited to apply for Nova Scotia Provincial Nominee Program upon being nominated are instantly awarded 600 CRS score. This score is mostly enough to get a candidate selected to apply for Canada Permanent Residence in the next Express Entry Draw.

In the current year, Nova Scotia has several migration streams that individuals can choose to migrate to the province.

Over the past few years, Nova Scotia has made many changes to their immigration programs. Even though the Express Entry system is very new, Nova Scotia opted to embrace it and it is good news for candidates wishing to migrate to Nova Scotia. Nova Scotia is continuously introducing new immigration streams like the latest Entrepreneur streams.

The streams discontinued by Nova Scotia include the Non-Dependent Child of Nova Scotia Nominees Stream and the Agri-Food sector stream. Nova Scotia is even currently in the process of introducing new immigration streams for inviting skilled professionals.

Halifax, the capital of Nova Scotia is going to witness a huge growth in the economy. The Halifax Shipyard won a CAD$25 Billion Federal Government contract. This amount will be used to set up the Royal Canadian Navy. As building of new ships will be required, this also opens doors for mechanics and shipbuilding experts.

All of the Nova Scotia immigration categories have their own set of rules and requirements which every candidate needs to comply with. These categories are explained below. This information shared now will benefit you in understanding if you will be eligible to apply for a particular immigration program.

The Nova Scotia Provincial Nominee Program is mainly employer-driven. It is designed to fill the labor market needs of specific industries and jobs with qualified employers.

There are several immigration categories that individuals can use to apply for Nova Scotia immigration. Although, Express Entry makes reaching NSNP quicker and facilitates for smooth and faster processing.

The Nova Scotia’s Nova Scotia Immigration Express Entry Demand came into effect on January 1, 2015. This stream is for the skilled professional having post-secondary or other qualifications.

In order to qualify for the Nova Scotia Express Entry immigration selection system, a candidate must secure a minimum of 67 points, which are based on certain human factors. The maximum points a candidate can secure are as follows:

The candidate must have a minimum of one year of full-time working experience in the last five years in one of the eligible occupation.

Currently, there are 29 eligible occupations under this particular stream including –

The eligible occupations currently include:

Please be noted that Canada has said to change these eligible occupations list anytime.

Apart from meeting these criteria, candidates must also secure a Canadian Benchmark Score of CLB7 in each of different components of speaking, listening, reading and writing.

Additionally, Nova Scotia advises candidates not to apply for the Express Entry stream if:

The Nova Scotia provincial nominee program express entry experience is for candidates who have worked for an employer in Nova Scotia for 12 or more months. The program allows these candidates to become permanent residents. Even though candidates who seem eligible for the program must meet the following eligibility criteria:

You should not apply for Nova Scotia Experience Express Entry if you are:

After the PNP Express Entry demand, the second most popular PNP category is the Nova Scotia Skilled Worker Stream. This stream helps provincial employers to recruit and hire foreign skilled workers who can fit in the workforce demand in Nova Scotia. The Skilled Worker Stream is furthermore divided into three sub-categories. Each of these categories has their own eligibility criteria.

The second sub-category under the Skilled Worker Stream is the semi-skilled workers. This category is for candidates who hold work experience in a NOC level of C occupation. The candidate will need to meet all the eligibility criteria and should have worked at least for 6 months with a Nova Scotia employer in order to be considered eligible.

The third sub-category under the Skilled Worker Stream is the low-skilled workers. This category is for candidates who hold a work experience in a NOC level of D occupation. Again, the candidate will need to meet all the eligibility criteria and must have worked for at least 6 months with an employer in Nova Scotia.

These are the eligibility criteria that Skilled, Semi-Skilled and Low-Skilled workers:

The employer sponsoring the candidate must also meet certain eligibility criteria. They are as follows:

The International Graduate Stream is designed to help Canadian employers to hire international graduates from recognized Canadian Universities. However, the skills that the graduate possesses should be in limited supply with the employer.

Like all other Nova Scotia provincial nominee program, the International Graduate Stream is employer driven. The student will only be eligible if the employer offers him a full-time, permanent job. Furthermore, the student must be offered a job that is closely related to his education.

The Nova Scotia Entrepreneur Stream is still under development and is the latest entry into the program. Candidates will need to have a net worth of CAD $400,000 or must make a minimum equity investment of CAD $150,000. The candidate will also need to enter Canada under a temporary work permit of 2 years and must demonstrate their intent in staying and doing business in Nova Scotia.